Today, a colleague reached out to me with a problem that he could not fix. Basically, what happened was that an upgrade for a clients’ Azure AD Sync failed. The Azure AD client had become unusable, thus he decided to remove the entire client and reinstall it.

In the control panel, you could clearly see the presence of the Sync Service, but when starting the service, it did not do anything.

First thing I tried was to reinstall the Azure AD Sync and see what happens for myself. That way I could see errors and messages the colleague did not see at first.

When installing the Azure AD Client, the following error was displayed: “Service ADSync not found on computer”. 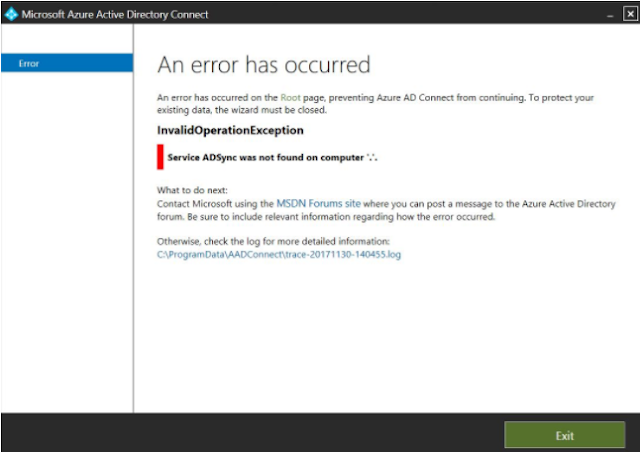 After a good dig, I finally found something that fixed the problem.

During the removal of all the services, something must have gone wrong and must have left some values behind, including registry values. To fix this problem, I had to remove the leftovers in the register.

Go to HKEY_LOCAL_MACHINE\SOFTWARE\Classes\Installer\Products and look trough the SID’s. Find the ones that contains anything with value “Azure AD” in the key “Value”. With anything, I mean anything. The Azure AD Shell, Sync Services and Client.

When those keys are removed, restart the Azure AD Installer and the installer went through. A new Azure AD instance was installed and the sync was happening again.

I’m a 27 year-old Belgian working for Orbid NV as Senior System Engineer. I’m a member of the cloud Team where I focus on everything from Teams PSTN and Exchange to AVD & Intune.